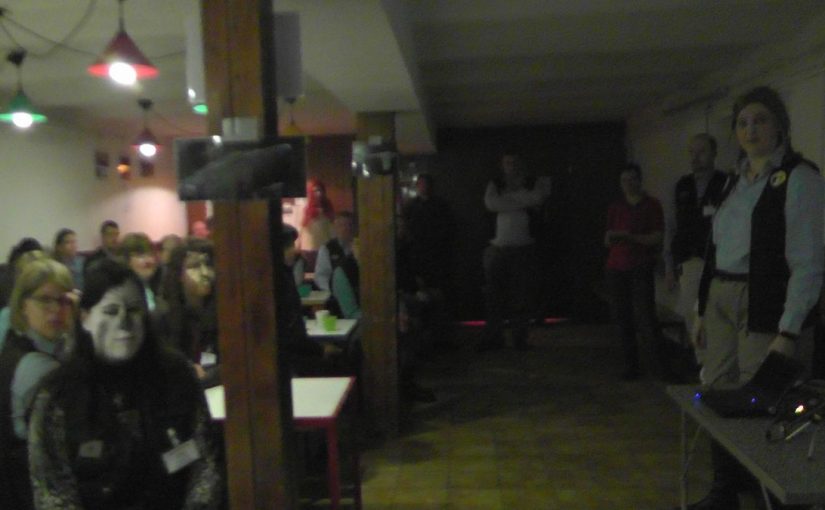 “Why can you set the clock after the alarm?” Yelled Admiral McCloud into the room. “It’s amazing, 9:00 am standard time sharp and we have an emergency! What is it?”

The crew gathered in the conference room looked towards the door. McCloud had stopped in the doorway. The alarm was still ringing through the corridors of ATLANTIS base.
“Can anyone turn off the noise?” Asked McCloud. “I think they are all gathered.”
“All but you, sir,” confirmed Commander Gibeur, who was standing at a table. She had switched on the projection screen. An overview map of the solar system could be seen on the screen. And points that moved between planets. Something had happened.
“Well, I’m here now,” said McCloud. “So what’s up?”
Gibeur brushed her hair back from her face. She was quite tense. “It happens what we had long feared. The Armada, which has been shielding the solar system from the outside world for almost a month, has started moving. A squadron is moving towards Uranus.”
“Uranus!” McCloud’s eyes widened. “So they really want to disrupt the ceremony?”
“I don’t think they just want to disrupt the ceremony,” said Gibeur. “They want to prevent them. Intelligence reports say that Scurra, the now deposed Praetor of Lokubami, has moved to an unknown location. Armed militias are moving towards the capital of Lokubami. We must suspect that they want to implement Scurra’s plan, in which he is proclaimed emperor. “
McCloud shook his head. “Why always emperor? Praetor is also a nice office and when you’re done, you just leave.”
“You know, sir,” Gibeur pointed out, “that those who have power are always afraid of losing it again. The only question is: what do we do now?”
All the officers in the room stared at McCloud in awe. The decision he had to make now was not an easy one.
“Which ship is nearby?” Asked the admiral.
“The BOURGOGNE,” replied Gibeur. “She is in the same position and is watching the situation exactly as we are.”

“Basically we have no choice,” McCloud stated. “Our job is to protect freedom, peace and democracy. Even if democracy is as strangely shaped as in Lokubami. But we cannot risk losing that. Get in touch with BOURGOGNE. They have to stop the squadron.” . If the BOURGOGNE should ask for support … do we have other ships nearby? “
“The HOOD would still be available.”
“The HOOD, of all things,” McCloud grumbled. “Okay, if the worst comes to the worst, let’s use them. But to be on the safe side, put the fleet on alert. Who knows what the alien armada is up to. We may have to help out in many places in the solar system.”
“Yes, sir! I will inform the BOURGOGNE immediately.”
“And to everyone else: I need tactics and suggestions! Look at the maps, the strength of the Armada, all the information you need. This could be difficult today and I want us to be prepared!”
The officers immediately got to work. In the meantime, Commander Gibeur spoke to the BOURGOGNE, who immediately set out to intercept the foreign squadron.

Click here to see how the BOURGOGNE is doing in “Iteriú Rangatira’s Finest Hour” on ASTROCOHORS CLUB.