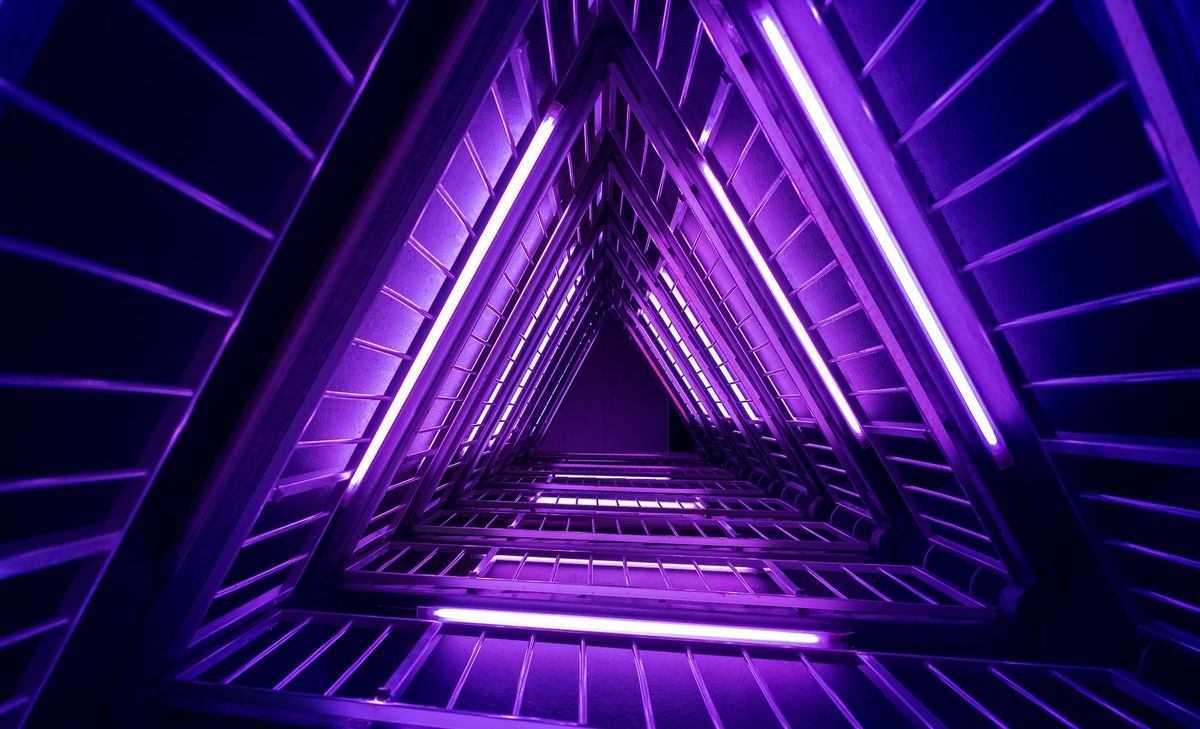 The Purple Death was one of the most advanced battleships in the army of the Usovai’i. The ship was shaped like a diamond. A rhombus. A diamond made of purple metal. The color was chosen on purpose. The ship should look disturbing. And the people of the planets should be able to recognize it. Because soon one would only speak of this battleship as the “dark threat”. The Praepositus Pupepa personally ordered the operation. And he had also chosen the destination: the planet Kor Ywen.
“Admiral, the ship is in position!” Reported an officer.
Admiral Parem turned to him. Both were on the Bridge of the Purple Death.
“Can they see us from the planet?” Asked the admiral.
“No. We’re still too far away.”
“Then activate the energy collector. And tell the pilots to get ready for phase 2.”

The energy collector was the heart of the ship. Everything on the Purple Death had been built around it. Praepositus Pupepa …
The sentence cannot be ended in this way. It was supposed to say that the Praepositus Pupepa had planned everything exactly. But that was not correct. Cofehaf Pupepa did not plan anything “exactly”. He thought he was an extremely stable genius, so it was enough for him to make some quick decision and then deal with it somehow. Like this mission, with which the Purple Death should officially start its work. Pupepa wanted to send a warning to the people of Kor Ywen. At the same time, he finally wanted to silence the ASTROCOHORS CLUB transmitter station. He knew he would have to attack the Sol system to do this. He didn’t care that this would involve diplomatic entanglements. The worlds in the Smaragdia Sector weren’t really in the planetary community anyway. However, the Usovai’i weren’t really there anymore, but of course that was something completely different! At least that was the case for Pupepa.
So what was the genius’ plan? Kor Ywen produced a lot of energy. The Purple Death had been designed to drain energy on a planetary level by sending out special waves. How exactly that worked was complicated. Pupepa was not concerned with details. He just needed to know what ended up happening. And what he did know was that the energy the Purple Death was drawing was enough to power a hyperspace gate. The technology of hyperspace gates has existed for a long time, at least in theory. In practice, however, it turned out that the energy requirement of such a gate was extremely high. Where the energy should come from, there was no solution for a long time. But now it was found: planetary energy consumption.
So the Purple Death would drain Kor Ywen’s energy and use it to create a hyperspace gate. The gate would create a hyperspace tunnel, the exit of which could be chosen freely. In contrast to the existing tunnels, which always connected only the same two points.
So you would end the tunnel in the Sol system. Space fighters would travel through the tunnel and destroy the ASTROCOHORS CLUB transmitter station in the Sol system. Then finally there would be silence! They would no longer question his authority.
The only problem was: Pupepa had no authority at all to be questioned.

A steady hum went through the ship.
“Well?” Asked the admiral.
“It started,” replied one of the officers. “As expected, we will need a little more time than we originally thought.”
“What? How come?”
“Well, uh … The Praepositus gave the instruction to work at full power. We can’t go to full power, so we only consume about 80% of the calculated energy. But that only delays the activation of the hyperspace gate by about four minutes.”
“Why can’t we go to full capacity? The Praepositus wants to see results!”
The officer appeared very nervous. Nervous like offices always were, because the Praepositus could be a very impatient man. He had no understanding for anything, not even the laws of nature.
“Admiral Parem,” said the officer slowly. “There is a garbage dump on the moon of the planet Kor Ywen. The garbage stored there is extremely dangerous. If we turn the power up too high, we risk an explosion.”
“Why?”
“The garbage could be charged by the energy we absorb. As if you were putting pressure in a boiler. The pressure would build up and result in an explosion.”
“I see,” said Parem. “Then we’ll just continue like this. The few minutes …”
“Admiral!” Called another officer. “The command was just revoked and the energy collector turned to full capacity!”
“What? Who gave the order?”
“Wait … Um … that came from Vice Leader Pecapac’s quarters. From him personally!”
“What does he think? Even if he is the Vice Leader, he can’t just go into a military operation like that …”
“Admiral!” Interrupted the other officer. “The energy levels for the moon Botriro are increasing! The angle vector is shifting!”
“Shut down the energy of the collector immediately! Or at least minimize it!”
“I’m trying!” Said the officer. “But it looks like the Vice Leader has blocked the order. You need the highest clearance to change something.”
“Put me through to the Vice Leader’s quarters,” the admiral ordered. “Tell him it’s urgent!”
“Yes, sir!”

The officer typed on the keyboard in front of him. He had to be quick. This world was in peril anyway, but it would get more serious problems, if …
“The Vice Leader doesn’t answer my calls.”
“Admiral,” said another officer. “The energy levels of the moon continue to rise. The angle vector is now …”
A flash of light could be seen through the large window of the bridge, emanating from the moon of the planet Kor Ywen. Though the explosion had occurred on the side facing away from the ship, the flash had been seen.
“Explosion on the moon, sir!” Reported one of the officers.
“You don’t say!”
“Admiral, now we can keep the weapon level,” said another. “The garbage dump has exploded and is probably burning out now.”
“Hmp. Then we’ll continue.”

The large collectors absorbed the planet’s energy. The bridge’s instrument registered that energy still came back in a few areas of the planet. Emergency energy. It was strange, but the collectors didn’t seem to pick them up. But it didn’t matter. Finally, the large accumulator inside the ship was charged enough to give the green light.
“Admiral, we can activate the hyperspace gate.”
“Excellent,” said Parem. “The squadron should get ready. Carry on!”
“Get ready to activate the hyperspace gate!”
Data has been checked. Everything was clear. The computer made the calculation and the parabolic antenna at the bottom of the Purple Death was positioned. Then the accumulators released their energy again. The hyperspace gate opened.
“Start squadron!”
“Admiral,” called one of the officers.
Parem sighed. Why were people constantly blaring his rank across the bridge? Well, whatever!
“Yeah, what’s wrong?” He asked.
“Sensors report spaceship launch on Kor Ywen!”
“There is definitely no spaceship launch planned. What kind of ship is that?”
The officer checked the scanner. “Small spacecraft. Identified as an ASTROCOHORS ship.”
“Very good,” said Parem happily. “This will be the first catch of the day.”
“I do not think so, Admiral!”
“No? But why not?”
The officer shrugged. “That is one of the drawbacks of this ship. We cannot shoot while maintaining the hyperspace gate. We will have to let the spaceship go.”
Admiral Parem made a face. “A few things on this ship urgently need to be adjusted.”
“The squadron has started and is on its way to hyperspace gate,” announced another officer.
At least that seemed to be going well. But there were already the next problems coming up.
“Admiral!” Not again. “The spaceship!”
“What about the spaceship?” Parem tried not to sound too annoyed.
“It changed the course!”
“And?”
“It is heading for the hyperspace gate!”
“What? Close hyperspace gate immediately!”
“That doesn’t work, sir! The squadron …”
“Command to the squadron: speed up! Show me the spaceship on the screen.”
The main screen was activated. It showed the view of an outside camera. You could see the hyperspace gate that created an opening in the space-time continuum. The squadron’s ships were moving toward the opening. Just like the other spaceship.
“Do you see the logo, sir?” Asked one of the officers. “This is an ASTROCOHORS CLUB ship.”
“So close and yet so far,” Parem replied.
“What do you mean, sir?”
“Now it would be easy to shoot down the ship. But we can’t. Prepare to close the hyperspace gate once the last ship from the squadron is through.”
“It won’t help. See! There!”

“What a hell of a guy this pilot is!” Said Parem not without admiration. He wondered what was going on aboard the small ship. And why it was headed for the hyperspace gate. Did they want to stop the squadron?
At that moment, the ship slid between the squadron’s battleships. It flew through the hyperspace gate. Shortly afterwards the squadron’s last ship had flown through.
“Hyperspace gate will be deactivated,” reported one officer. “We are waiting for a call from the squadron to open the escape route for them.”
“Very good, officer!” Said Parem. “In the meantime, get in touch with the Praepositus. I need to talk to him about the Vice Leader.”